Throughout history, diamonds have been the most highly valued of gemstones, worn and admired by royalty as a symbol of strength, status and divine invincibility. Over the centuries, diamonds have also become the ultimate declaration of love in the form of engagement rings, eternity rings and contemporary wedding bands. Diamonds possess a unique character, elegance and remain simply timeless, making them a great choice of gemstone for any piece of jewellery.Here at ORNAZ we have a wide collection of stunning and unique diamond jewellery, varying in colour, cuts and sizes, allowing you to create a fashion-forward statement, whatever your style.

For most, buying a diamond is a significant investment. Often the occasion involves not only a financial commitment, but an emotional one as well.

Where to Start When Buying Diamonds

If you want to learn the basics of diamond buying, start with our section on the "four Cs of diamonds" which explains the grading system for diamonds. 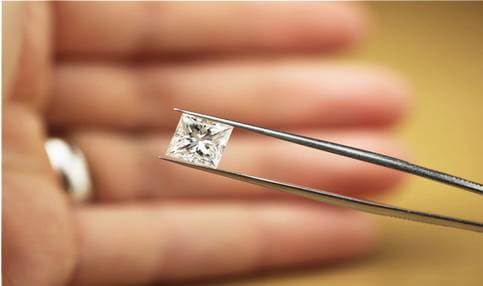 Cut, Carat, Color and Clarity - are the universal language of the diamond. Understanding this language will help you understand your diamond.

The term "cut" has two references: One is the diamond's shape, the other is the quality, determined by its proportions, symmetry and polish.

Simply stated, clarity is a measure of the tiny imperfections found in most every diamond.

A flawless diamond with little to no imperfections is often desired due to its rarity, but they are also the most costly. Therefore, it is important to keep in mind that it is very common for diamonds to be formed with slight imperfections.

Clarity is evaluated using a 10-power magnification. This means that the object viewed appears 10 times its actual size. The diamond grader examines the clarity characteristics with respect to the nature and number of characteristics, as well as their size, color and position. The clarity grade assigned reflects the degree of visibility of the characteristics. 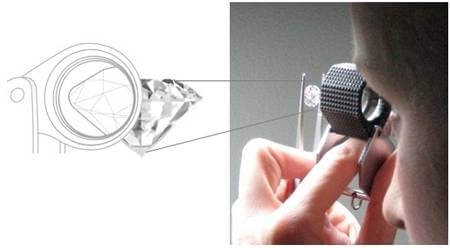 The IF Grade (Internally Flawless)

A diamond which has no internal characteristics but which, due to minor finish faults, is not flawless and therefore cannot be designated FL or flawless, may be called IF or internally flawless provided the finish faults are so minute that they can be removed by a gentle polishing with only an insignificant loss of weight.

The term VVS is used for diamonds with internal characteristics very, very difficult for a qualified observer to find under observation conditions as described. Further, there may only be insignificant finish faults.

The VS Grades (Very Small Inclusions)

The term VS is used for diamonds in which it is difficult for a qualified observer, under observation conditions as described, to find either a few somewhat larger internal characteristics or several very small ones.

The term SI is used for diamonds in which a qualified observer may, without difficulty, under observation conditions as described, find internal characteristics. Further, there may only occur single finish faults of an insignificant kind.

The I Grades (Imperfect)

The term I or imperfect is used for diamonds in which a qualified observer, with the naked eye, can see internal characteristics and/or in which such major faults occur, which substantially reduce the value of the stone.

Choosing the right color for your diamond is based on personal preference. It's important to remember that you are generally searching for a stone with little to no color.

Diamonds are colored when the crystals grow inside the earth. Tiny traces of some elements like nitrogen can color the crystals. In addition, the pressure involved in the diamond formation creates distortion in the crystal structure which is believed to also contribute to its color.

At ORNAZ, we use the GIA (Gemological Institute of America) scale of colour. On this scale, diamond colour is graded from D, which has the least colour, through the alphabet to Z, which has a light yellow colour. Truly colourless diamonds (D) are treasured for their rarity.

Diamonds with less color are more rare and valuable. Only about 5,000 of the polished diamonds produced each year weighing 1/2 carat or more are colorless. Most of the diamonds sold are grades G to L. For fancy diamonds, the value goes up with the intensity of the color.

When you shop smart with ORNAZ , you will feel confident in your decision. You know that the jeweler is qualified to describe the characteristics of your diamond, so you can make the informed choice that is right for you.